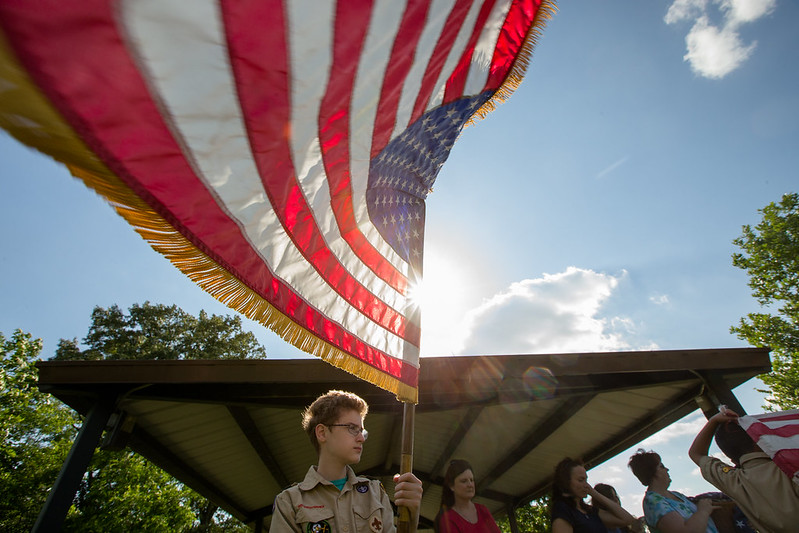 This past weekend I was privileged to witness a flag retirement ceremony at a Boy Scout event (no matter “Boy” was dropped from the name or how many girls join, they will always be Boy Scouts to me) my daughter’s Venturing Crew helped run. Among other things, Scouts teaches kids to respect the flag and what it stands for.

In case you don’t know, the proper care of the American flag includes retiring it when the edges show wear or begin to fray. The flag is not supposed to be scrunched up and discarded. Even in retirement, it is treated with care.

In our Boy Scout flag retirement ceremony a small group of active duty military men and women volunteered for the final display and folding of the flag. Four soldiers unfolded and displayed the flag while a fifth soldier read a solemn passage about the flag’s significance. The soldiers then precisely refolded the flag into a tight triangle and presented it to the Venture Crew. One young man accepted the flag with both hands and clasped it to his chest with crossed forearms. The Crew pivoted in unison and walked to the side. Later, they cut up the flag for burning over a wood fire during the evening ceremony and the ashes were collected for burial.

During both ceremonies, more than 200 middle and high schoolers, mostly boys, remained silent, still, and standing. If you are familiar with this age, that’s a miracle!

There is more than one way to conduct a flag retirement ceremony and to cut up the flag; it is up to the group handling it. However, the blue square with white stars should remain intact to represent the unity of the states. Our Crew cut out the blue portion and then cut the flag’s stripes into strips.

More than a piece of fabric

People who routinely handle the flag do so with reverence. The tightly folded bulk seems to hold the weight of our values, aspirations, and sacrifices.

To behold a hoisted American flag with pride is to be aware of history—the good and the bad, the loyalty of soldiers fighting for each other and their country, and the relative safety and opportunities we all enjoy.

Our roads are free of mines; droves of ruthless gangs don’t wander throwing acid, butchering, murdering and raping; disease-free water is piped right into our homes; and basic education is free.

It is to know that at its heart, the United States of America strives to be better. We want life here to be fair.

Fair means LeBron James and a second-year rookie are paid their worth to their team and the NBA. Fair means male and female computer programmers with comparable experience and abilities receive similar compensation to each other, not equal pay to a teacher or cashier. And parents understand that treating people fairly does not mean treating them all the same.

Anyone who really wants a better life is welcome to try. American citizenship doesn’t promise anything except Freedom and Opportunity. These two ideas are the reason a mother who can’t swim gets on a tiny boat with her young children to cross the southern Atlantic Ocean, or walks miles in blistering terrain: for relative safety and the freedom to pursue a better life.

Freedom and Opportunity are best understood by people who have lived without them. How can Americans appreciate what they cannot conceive the lack of?

The rest of the Scouting weekend the kids:

Our flag represents our best, our flawed past, and our hopes for the future. Freedom and free will means we will make bad choices. Choices. It is up to us to improve, persevere, and pay attention. It’s our right to be independent and disagree.

The United States flag deserves our reverence and gratitude for this American life. Look around: can you find just 100 people clamoring to migrate to another country and who’ll actually do it? Why do you think that is?

Identify five things in your American life that you take for granted.

Now imagine life without them.